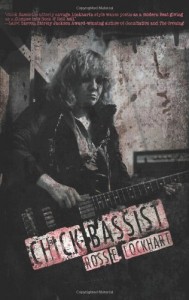 Chick Bassist welcomes you into punk rock hell, the friendless disillusionment of waking up in a shitty motel room in California with half a joint and an empty six-pack, radio blaring Lou Reed, concrete ocean on all sides and a blazing inferno within.

Erin Locke, the Queen of Rock, wakes up at the crack of noon.

“La Cucaracha” has infested her dream, and now echoes through her hotel room. “What the fuck is that?” Erin’s voice is muffled by the thick blankets that completely cover her. Beside the lump that is Erin lies a black Ibanez bass guitar. A Heroes for Goats sticker adorns its reflective surface. Erin thrusts one arm out from beneath the blankets and fumbles for the nonexistent alarm clock. She’s still slogging off fragments of her dream, that goddamn recurrent creep-out where she’s a praying mantis, translucent green, perched on the crest of a burning city, devouring her still-copulating preymate. This time her meal had worn her father’s face. Those dreams were the worst.